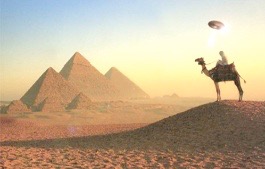 Num 13:28 Nevertheless the people [be] strong that dwell in the land, and the cities [are] walled, [and] very great: and moreover we saw the children of Anak there.

Num 13:33 And there we saw the giants, the sons of Anak, which come of the giants: and we were in our own sight as grasshoppers, and so we were in their sight.

Jos 15:14 And Caleb drove thence the three sons of Anak, Sheshai, and Ahiman, and Talmai, the children of Anak

Jos 14:15 And the name of Hebron before [was] Kirjatharba ; [which Arba was] a great man among the Anakims. And the land had rest from war.

Deu 2:10 The Emims dwelt therein in times past, a people great, and many, and tall, as the Anakims;

Jos 15:14 And Caleb drove thence the three sons of Anak, Sheshai , and Ahiman, and Talmai, the children of Anak.

So we see that throughout the Old Testament, all that was going on was ISRAEL fighting Against ALIENS and their Off Spring. These were SPECIES WARS.

Jos 11:23 So Joshua took the whole land, according to all that the LORD said unto Moses; and Joshua gave it for an inheritance unto Israel according to their divisions by their tribes. And the land rested from war.

You notice that in some of these Battles, God had ISRAEL wipe out the cattle as well as the ALIENS. This Low Life Species had sex with cattle. The Cattle was Infected and God did not want their cattle, mingling with ISRAEL'S cattle.

There is More to the subject of Cattle and the Meaning at a Later time. ( THIS WILL REALLY BE GOING WHERE NO MAN HAS GONE BEFORE )

But ISRAEL was also Infected with Idol Worship to ALIEN GODS. Israel was Worshiping UFO'S, ALIENS. That was IDOL WORSHIP, the HOSTS of Heaven.

Zephaniah 1:5
those who worship the army of the sky on the housetops, those who worship and swear by Yahweh and also swear by Malcam,
Margin Malcham
An idol of the Ammonites, same as Molech, or Milcom .Zephaniah

Deu 13:6 ¶
If thy brother, the son of thy mother, or thy son, or thy daughter, or the wife of thy bosom, or thy friend, which is as thine own soul, entice thee secretly, saying, Let us go and serve other gods, which thou hast not known, thou, nor thy fathers;

Amo 1:7 But I will send a fire on the wall of Gaza, which shall devour the palaces thereof:

( Future of Gaza according to GOD who has Promised to Wipe Gaze out, in his TIming.)

Then this War starts over with DAVID who Takes on the ALIENS once again. The Tribes of Alien Off Spring came up Against ISRAEL once again in 1 Samuel 17.
http://www.blueletterbible.org/Bible.cfm?b=1Sa&c=17&t=KJV

They issue forth a challenge to ISRAEL.

1Sa 17:4 And there went out a champion out of the camp of the Philistines, named Goliath, of Gath, whose height [was] six cubits and a span.

Goliath
1) the Philistine giant of Gath slain by David's sling

GOLIATH Issues Forth this Challenge to ISRAEL

1Sa 17:10 And the Philistine said, I defy the armies of Israel this day; give me a man, that we may fight together.

Here we see that all these Aliens want to do is Challenge ISRAEL. THIS IS GOING ON ALL AROUND ISRAEL TO HIS MOMENT, AS I WRITE. THE ALIEN OFF SPRING are Still Challenging ISRAEL and attempting to wipe them out.

Even at the UN. They stand up and talk about Not Recognizing Israel as a NATION and act like they have some LEGAL Right on this Planet. Earth is a Prison Dimension.

They have NO LEGAL RIGHTS. THEY are ALIENS. Their Seed is from ALIEN DNA.

God gave Dominon to Adam and Eve, the enemy Stole it, JESUS got it back. (more on this subject later, since that is what all this info is leading to, MORE REVELATION on the VICTORY of the CROSS, that has never been understood. )

In the Matter of Israel wanting a King over them, they got a False God.

1Sa 10:19
And ye have this day rejected your God, who himself saved you out of all your adversities and your tribulations; and ye have said unto him, Nay, but set a king over us. Now therefore present yourselves before the LORD by your tribes, and by your thousands.

SAUL was an Alien

1Sa 10:23 And they ran and fetched him thence: and when he stood among the people, he was higher than any of the people from his shoulders and upward.

1Ch 8:37 And Moza begat Binea: Rapha was his son, Eleasah his son, Azel his son:

Benjamin = "son of the right hand"
Jacob's and Rachel's youngest son, Joseph's full brother
son of Bilhan, great-grandson of Benjamin
a Benjamite, one of the sons of Harim, in the time of Ezra who had taken a strange wife
the tribe descended from Benjamin, the son of Jacob

2Sa 21:16 And Ishbibenob, which was of the sons of the giant, the weight of whose spear weighed three hundred shekels of brass in weight, he being girded with a new sword, thought to have slain David.

2Sa 21:18 ¶ And it came to pass after this, that there was again a battle with the Philistines at Gob: then Sibbechai the Hushathite slew Saph, which was of the sons of the giant.

All these Tribes in this area of Egypt, were OFF SPRING of ALIENS.

Gen 14:5 ¶ And in the fourteenth year came Chedorlaomer, and the kings that [were] with him, and smote the Rephaims in Ashteroth Karnaim, and the Zuzims in Ham, and the Emims in Shaveh Kiriathaim,

This is where Hagar was From. She is Off Spring of an Alien Race and She Gave Birth to Ishmael, who is a Cross between Human and Alien.

Ishmael and Hagar are Cast out and told they can never be HEIRS to anything.

This is the ROOT of all the Problems in Middle East. Aliens trying to get Legal Rights to Something that was Never their RIGHT to BEGIN WITH.

Gen 21:10 Wherefore she said unto Abraham, Cast out this bondwoman and her son: for the son of this bondwoman shall not be heir with my son, [even] with Isaac.

Then the Father of all ALIENS ( false God ) comes to Hagar

Gen 21:18 Arise, lift up the lad, and hold him in thine hand; for I will make him a great nation.

Now we have the ALIENS from Ishmael Seed, Verses ISAAC, the SEED of PROMISE from Abraham. ( seed of FAITH )

The WHOLE MIDDLE EAST is a HOT BED of ALIEN OFF SPRING who are still trying to WIPE out ISRAEL and the SEED of PROMISE.

The TRIBES of ARABS throughout this area had their DNA PERVERTED thousands of years ago. All these Tribes are descendants of either, ISAAC or ISHMAEL.

Sons of ISHMAEL are SONS of GIANTS, the fallen angels.

These WARS were about ALIENS attempting to Pollute the Human Race with their Likeness and Create so much DNA perversion, that The SEED of PROMISE would never be able to Destroy or over ride their seed. ( they have No Spiritual insight )

Jeremiah Prophesied to these Aliens in Anathoth.

Jer 11:21 ¶ Therefore thus saith the LORD of the men of Anathoth, that seek thy life, saying, Prophesy not in the name of the LORD, that thou die not by our hand:

Jer 11:22 Therefore thus saith the LORD of hosts, Behold, I will punish them: the young men shall die by the sword; their sons and their daughters shall die by famine:

Jer 11:23 And there shall be no remnant of them: for I will bring evil upon the men of Anathoth, [even] the year of their visitation.

So Here Jeremiah is being threatened by Off Spring of Aliens. They tell him to Stop Prophesying in the name of the LORD or he is going to Die.

God tells Jeremiah that he is going to wipe them out.

Israel has forgotten who their TRUE ENEMY was. They are Still Fighting the Off Spring of Aliens in Gaze and they are going to be the Only Ones Still Standing when God comes with His Chariots of Fire to wipe out all Israel's enemies once and for all.

Isa 24:21 And it shall come to pass in that day, that the LORD shall punish the host of the high ones that are on high, and the kings of the earth upon the earth.

Isa 66:15 For, behold, the LORD will come with fire, and with his chariots like a whirlwind, to render his anger with fury, and his rebuke with flames of fire.