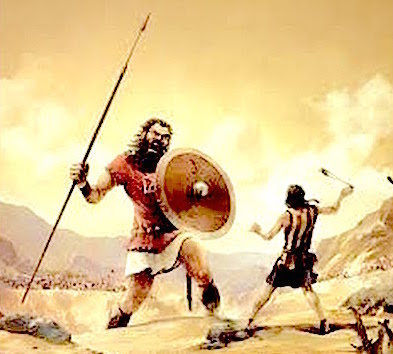 Gen 6:4 There were giants in the earth in those days; and also after that, when the sons of God came in unto the daughters of men, and they bare children to them, the same became mighty men which were of old, men of renown.

Num 13:33 And there we saw the giants, the sons of Anak, which come of the giants: and we were in our own sight as grasshoppers, and so we were in their sight.

Deu 3:13 And the rest of Gilead, and all Bashan, being the kingdom of Og, gave I unto the half tribe of Manasseh; all the region of Argob, with all Bashan, which was called the land of giants.

Jos 12:4 And the coast of Og king of Bashan, which was of the remnant of the giants, that dwelt at Ashtaroth and at Edrei,

Jos 13:12
All the kingdom of Og in Bashan, which reigned in Ashtaroth and in Edrei, who remained of the remnant of the giants: for these did Moses smite, and cast them out.

Jos 17:15 And Joshua answered them, If thou be a great people, then get thee up to the wood country, and cut down for thyself there in the land of the Perizzites and of the giants, if mount Ephraim be too narrow for thee.