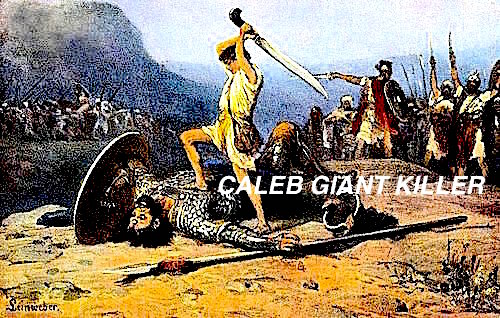 The JUST SHALL LIVE by FAITH

God is Looking for Giant Fighters/  ( There are Giants in the Land, Masquerading . )

Caleb is of the Tribe of JUDAH,   Jesus tribe. So he is a descendant of DAVID, of the
royal line of David, who was   A GIANT FIGHTER.

Caleb, Joshua and others go to spy out the Land God wants to give them. But they all come back
with a BAD REPORT of NO FAITH,   except,  Caleb and Joshua, who stated that the Gants in the
land are bread for them.

Numbers 13:30 And Caleb stilled the people before Moses, and said, Let us go up at once, and
possess it; for we are well able to overcome it.

Numbers 14:9 Only rebel not ye against the LORD, neither fear ye the people of the land; for
they are bread for us: their defence is departed from them, and the LORD is with us: fear them not.

Numbers 14:14 But my servant Caleb, because he had another spirit with him, and hath followed
me fully, him will I bring into the land whereinto he went; and his seed shall possess it.

Numbers 14:30 Doubtless ye shall not come into the land, concerning which I sware to make you
dwell therein, save Caleb the son of Jephunneh, and Joshua the son of Nun.

Caleb and Joshua then have to wait 40 years till  all those who had a Bad Report dropped dead,
before they can go in and take out the Giants.

Caleb and Joshua go in and take out the Giants who are in the Land that the Lord allotted to
each of them and their  Tribe.

Joshua  15:14 And Caleb drove thence the three sons of Anak, Sheshai, and Ahiman,
and Talmai, the children of Anak.

STUDY NOTES for those who Can HEAR.

1) progenitor of a family, or tribe of the giant people in Canaan
Definition of Progenitor/ means the original giant seed.

Num 13:28
Nevertheless the people [be] strong that dwell in the land, and the cities [are] walled, [and] very
great: and moreover we saw the children of Anak there.

Num 13:33 And there we saw the giants, the sons of Anak, which come of the giants:
and we were in our own sight as grasshoppers, and so we were in their sight.

Emims Meaning:  terrors a warlike tribe of giants who were defeated by Chedorlaomer and his
allies in the plain of Kiriathaim / In the time of Abraham they occupied the country east of
Jordan, afterwards the land of the Moabites

The Rephaim are called abomination. The Anti Christ will be  a descendant of this Tribe
Deuteronomy 3:11/    cross reference of  Rev 13:18

To Those who can Hear, more shall be given.   If you have ears to Hear.  Pun intended.

We are of the TRIBE of JUDAH, since we are In Christ.  We were BORN GIANT FIGHTERS.